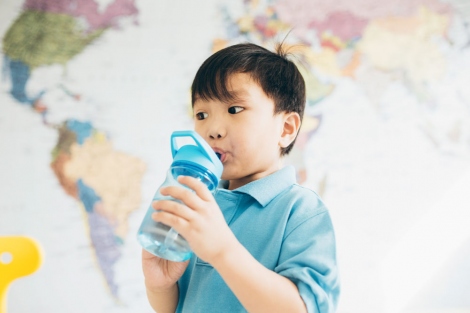 School children drink more water if the traditional water fountain is replaced by a dispenser with cups, according to findings of a study led by researchers at UC San Francisco.

In the study, published July 7 in Preventing Chronic Disease, researchers compared water intake over a four-month period among students at 12 low-income middle schools in the San Francisco Bay Area. They found that nearly 20 percent more children drank water at lunch in the schools that provided dispensers, cups and signage in cafeterias, compared to the schools that provided drinking fountains minus cups and signage.

U.S. legislation requires that schools offer drinking water where meals are served. While health efforts have focused on reducing access to sugary drinks in schools, few initiatives have aimed at improving access to drinking water, the authors noted.

“Typically, water fountains are not appealing places to drink,” said first author Anisha Patel, MD, assistant professor in the UCSF Division of General Pediatrics and a pediatrician at UCSF Benioff Children’s Hospital San Francisco. “The water fountain may be used to prop up the mop and broom; there may be debris and other hygiene concerns; and it is difficult for children to drink more than a few sips from a fountain unless schools provide cups.”

In the study, the water dispensers were promoted over a six-week period via school-wide audio announcements, parent newsletters, posting of signage and student incentives. The four schools that served as a comparison group did not promote water drinking.

Results were obtained from student surveys and researchers’ measurements of the volume of water taken from the dispensers.

No differences were found in the students’ consumption of sugary beverages, milk or fruit juice.

“Making drinking water more accessible to students may not be sufficient to change drinking habits,” said Patel, who is also affiliated with the Philip R. Lee Institute for Health Policy Studies at UCSF. “We need supportive school district policies, environmental changes and more substantial education to help people turn to water as their default to quench thirst.”

One-fifth of students at low-income San Francisco Bay Area middle schools drink sugary beverages at lunchtime, mainly brought from home or purchased on their way to school, according to a 2015 study co-authored by Patel. A growing body of research has linked sugary drinks to significant health conditions, including diabetes, metabolic syndrome, cardiovascular disease and liver disease.

The study is supported by funding from the Robert Wood Johnson Foundation Healthy Eating Research Program, and grants from the National Institutes of Health and the U.S. Department of Health and Human Services. The authors declare no conflicts of interest.

The Water First Fact Sheet can be downloaded here.

The Water First Toolkit can be downloaded here.

Researchers have conflicts of interest when their work is significantly dependent on a funding source that holds a vested interest in the outcome of their research.

Means the same as sugar-sweetened beverages or liquid sugars.

Also called Syndrome X is a group of body abnormalities that go along with increased risk of cardiovascular disease, type 2 diabetes and stroke. The definition of this syndrome varies a little worldwide.

A broad term meaning any bodily process in which the liver is injured or does not work as it is supposed to. In this website we focus on liver diseases in which the diet hurts the liver

This is a drink that is made entirely (100%) from the liquid which comes from squeezing or grinding up the part of the fruit we would normally eat. Sugar is not added to this drink. The drink will have the sugars that come from the food itself. The juice will likely have less fiber than the fruit. Fiber serves to decrease the speed and amount of sugars absorbed from sugary foods.

SugarScience is the authoritative source for evidence-based, scientific information about sugar and its impact on health.

Growing scientific evidence shows that too much added sugar, over time, is linked to diabetes, heart disease and liver disease.